La La Land continued its seemingly unstoppable charge toward the Oscars with a record-breaking night at the Golden Globes. It won seven awards, including best acting gongs for Ryan Gosling and Emma Stone and best director for Damien Chazelle, but Moonlight – which had been snubbed throughout the evening – took home best picture drama.

But the standout moment of the evening came away from the awards action. Meryl Streep’s searing critique of Donald Trump’s imitation and treatment of the disabled New York Times journalist Serge Kovaleski was a sobering moment which brought a stunned silence to the usually boisterous Golden Globes.

“This instinct to humiliate, when it’s modelled by someone in the public platform,” she said. “By someone powerful, it filters down into everyone’s life because it kind of gives permission for other people to do the same thing. Disrespect invites disrespect, violence invites violence. When the powerful use their position to bully others, we all lose.”

It a great night for British talent, with the cast of The Night Manager having a particularly special evening – Tom Hiddleston, Olivia Colman and Hugh Laurie all won on the night. Claire Foy also took home a gong for best actress in a TV series, for her performance in The Crown.

There was an early upset when Aaron Taylor-Johnson took home the award for best supporting actor over strong favourite Mahershala Ali, who was expected to win for his turn in Barry Jenkins’ Moonlight. Taylor-Johnson has only picked up one other award this season, while Ali has won nearly every major award so far.

There were other big shocks as well, including Isabelle Huppert winning best actress in a motion picture for her performance in Paul Verhoeven’s controversial and divisive rape revenge comedy Elle. The film also won the Golden Globes for best foreign language film. Moonlight’s best picture win was surprising as well, if only because it had been shut out of every other category. 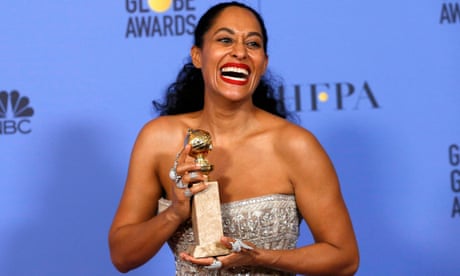 In an emotional speech, Gosling thanked his wife, actor Eva Mendes, for her support. “You don’t get to be up here without standing on the shoulders of a mountain of people, and there’s just no time to thank everyone,” he said. “I’d just like to try and thank one person properly. While I was dancing and playing piano and having one of the best experiences I’ve ever had on a film, my lady was raising our daughter, pregnant with our second, and trying to help her brother fight his battle with cancer.”

Despite a barrage of negative publicity for sexual harassment claims made back in 2010, Casey Affleck won the award for best actor in a drama for playing a grieving janitor in Manchester by the Sea. Viola Davis also continued her streak of wins for her role in Fences, with the award for best supporting actress.

Backstage, the actor spoke about Trump and the future of America. “I will, believe it or not, remove Trump from the equation, because I feel that it’s bigger than him,” she said. “I believe that it is our responsibility to uphold what it is to be an American and what America is about and the true meaning of what it means to pursue the American dream.”

The shocks and upsets continued in the television categories, with Donald Glover’s Atlanta transferring its critical acclaim into awards. The series won for best TV series, comedy, and Glover won in the best actor in a TV series, musical or comedy. Glover’s win was one of several victories for diverse actors.

Earlier in the evening, Tracee Ellis Ross became the first black woman to win the award for lead TV comedic actress at the Golden Globes since 1983, and in her acceptance speech addressed young women of colour: “This is for all of the women of colour whose stories, ideas, thoughts are not always considered worthy or important but I see you and we see you.”

There were some bizarre moments, too. Pre-show host Jenna Bush Hager was interviewing Pharrell Williams, who worked on the music for space-race drama Hidden Figures, when she mistakenly called the film Hidden Fences, conflating Hidden Figures with Fences, the August Wilson adaptation starring Denzel Washington and Viola Davis.

The performance of Jimmy Fallon failed to impress, with the Tonight Show host’s musical number based on La La Land falling flat, followed by his prompter failing to work.